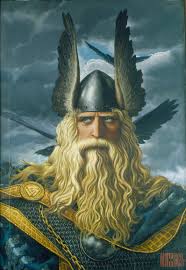 We met in the office a month later.  “There’s a lot I have problems with.” he said.

“I don’t like the way you backstabbed people at work in your 20s.”

“Neither do i, but thanks for bringing it to my attention.”

“Fair enough, Dad.  But I did not like, really did not like the way you forced yourself on Mom and fucked her.”

“Well I get that but you see if that had never happened, where would you be?”

I took my son to the Hall of Documents to read something his great grandfather had written.   Grandpa Eddie had among his other accomplishments (silver medal track star, mafia lawyer, teller of tales in children’s nursery schools) been the discoverer and translator of a lost manuscript by the Norse poet Snorri Sturluson.  Snorri was the poet of the old gods — Thor and Odin and the Fenr Wolf — although he wrote the eddas at a time when Christianity was supplanting the old religion.  (Snorri, as it happens gave JRR Tolkien the names for his dwarves in The Hobbit).

Grandpa Eddie had translated the following

DIALOGUE BETWEEN MAN AND THE ALLFATHER

Man: Allfather. I wish to read your book.  The book of your lives and where you came from and what you are about.

Man: (Having read) Why did you make man to suffer?  From plague and earthquake and war?  Why make a being for pain.

Allfather: Good question.  When the giants stormed Valhalla and caused much rapine and suffering and pain they wished for something that would wipe away their gigantic guilt.  The only thing I could do was to create a world where they could suffer.  For their vainglory they learned to be low.  For their brutality they learned fragilty.  For their egotism they learned love.

Man: Okay, but why did you make giants lusty for storming Valhalla

Allfather: What kind of question is that?

Man: What do you mean?

Allfather: Who would even think to make a world without giants?

My son said “I think you wrote that.”

You wrote it without paying attention to it but it is in your handwriting. You are writing so many things that you don’t even understand yet.  Brilliant things. Wonderful things. I’m so proud of you.  I’d do a milion more brutal shameful things to give you something to be ashamed of and something to write about.

My son: But how did I write it?  Why isn’t it in my Google Life Record?

I said: That old thing?  You are rewriting the rules of your language every moment to make your past tell the story you want to tell.